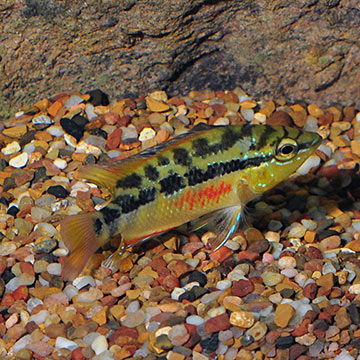 The Salvini Cichlid, also known as the Tricolor Cichlid and the Yellow Belly Cichlid, is a brightly colored cichlid from the lakes and rivers of southern Mexico and northern Central America. They have a bright yellow body with two blotchy dark lines running from the eyes to the caudal fin and turquoise-blue dots scattered over the body. The fins are long and have a turquoise-blue sheen to them. A bright red coloring is seen in the anal fins and on the body behind the pectoral fin, as well as edging the caudal fin. The head has approximately four horizontal stripes running along the forehead.

Salvini Cichlids require a tank of at least 50 gallons with a fine gravel or sand bottom. It does not burrow or destroy plants, which are recommended to use as territories. The Salvini Cichlid should be provided with numerous rocks and roots for use as hiding places. Plenty of room should be left for open swimming. They may be housed with smaller fish that are also more aggressive, but be aware, they are territorial and will bite others.

The males have pointed fins which is one way to distinguish between the sexes. Salvini Cichlids make excellent parents, and both the male and female share in the rearing of the fry. After carefully cleaning the rocks in the tank, the female will deposit up to 500 eggs.

Salvini Cichlid is omnivorous and will eat most prepared and frozen foods, including freeze-dried bloodworms, tubifex, and ocean plankton, as well as flake food and Cichlid pellets.

Write a Testimonial | Ask Customer Service
Devin G Chesterfield , IN
I purchased two salvini's about a year ago from this site,along with two convicts as well. The fish all arrived in great health, and looked better than the local pet store fish. I received a female and male, and had the chance to enjoy fry on three occasions. The female salvini was one of the more beautiful cichlids that I've kept. The only con that i experienced with the salvini's were their aggression. I have recently adopted the male salvini to a new home, in fear he was going to kill the female salvini and the two convicts. The fish were housed in a 75 gallon tank, just the four of them for a reference for anyone else reading this.
1-1 of 1 testimonials