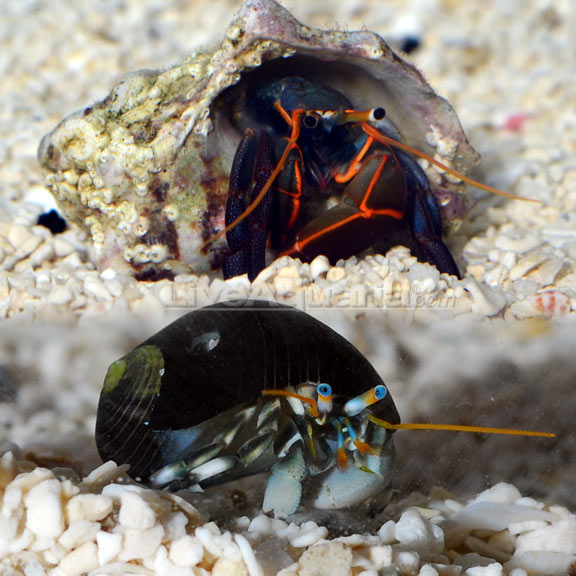 The Dwarf Zebra/Orange & Black Hermit Crab is one of the most popular hermit crabs for the home marine aquarium. It gets its name from its distinct coloration. Calcinus laevimanus is named for its colored pinchers and the white or orange bands that dress its otherwise dark legs. Like other members of the genus Calcinus, the Dwarf Zebra/Orange & Black Hermit Crab also has long eyestalks. However, this particular crab's eyestalks are a brilliant blue and fades into an orange-tinged upper half.

Since they scavenge for detritus and consume nuisance algae, including red slime algae (cyanobacteria), the Dwarf Zebra/Orange & Black Hermit Crab is a highly desired addition to the home reef aquarium. If there are insufficient algae in the aquarium, their diet should be supplemented with dried seaweed. Like other invertebrates, care needs to be taken with the use of medications. Additionally, strict water parameters must be maintained. Be sure to accommodate their growth by supplying empty shells of various size and shape.

Write a Testimonial | Ask Customer Service
David H Floyds Knobs , IN
We have three types of hermit crabs, and this is our favorite. They explore the entire tank and are constantly busy. If looking to add Hermit Crabs, I recommend the Dwarf Zebra Hermit Crab.
Kyle J Antioch , CA
These guy are fast, very hardy, and they grow fast. I had mine for about a year. It molted fine. The best hermit crab. It grows the fastest. It's in a 40 gallon with coral and anemones, urchins, and plants and does well. I have 2.
Nathan K Charles Town , WV
These guys are very entertaining. The first day most of them selected different shells that were more to their taste. The second day they re-enacted the movie "Cliffhanger" by dangling precariously from the live rock as they searched for food!
Jeneal S Twin Falls , ND
I've tried Blue Leg, Red Leg, and these Zebras and these are my favorite because they are always running around scavenging and love trying on new shells. Not shy at all! I'm ordering more!
Mackenzie H Milan , IN
We have many inverts in our reef system and these are by far the best. Don't let their smaller size fool you! They're loaded with personality and colorful too. I can't tell you how many hours I've sat watching their shananigins. They all arrived in tip-top shape and began eating as soon as they were released into the tank!
Richard G Highlands , TX
True, this particular little hermit does not reach the size that other dwarf hermits tend to. But still, it is imperative to furnish a variety of different size shells; this prevents them killing your snails & each other searching for a new home. My hermits always go for shells from dead freshwater mystery snails (free from my local pet store)...especially from albino snails...these "racing" shells are so thin & lightweight that the hermits choose them over anything else...thereby leaving my snails alone as long as they get adequate food.
1-6 of 6 testimonials