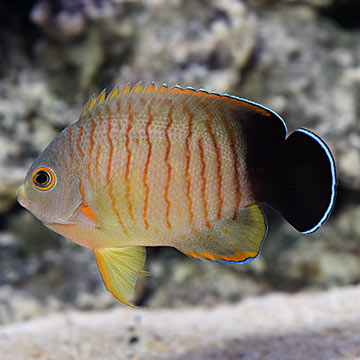 The Red Stripe Angelfish is known by many names including the Eibl's Angelfish, Eibl's Pygmy Angelfish, Orangelined Angelfish, Blacktail Angelfish, and Eibl's Dwarf Angel. Its pearlescent body is highlighted with several vertical, evenly-spaced orange to red stripes. The very back of the body and caudal fin are black. A brilliant sapphire-blue stripe outlines the caudal fin.

Red Stripe Angelfish requires a 70 gallon or larger aquarium with large amounts of live rock for hiding and grazing. With a tendency to be docile, the Red Stripe Angelfish can become more assertive once established. It prefers not to be housed with other Dwarf Angels. It may occasionally nip at sessile invertebrates and clam mantles.

It is extremely difficult to breed in an aquarium, and there are no distinguishing characteristics that help differentiate males from females.

The diet of the Red Stripe Angelfish should include Spirulina, marine algae, mysis or frozen shrimp, and other meaty items.

Write a Testimonial | Ask Customer Service
Roger K Aurora , CO
I have a Eibli in my 125 gallon fowlr. It is extremly hardy and a very beautiful fish. Mine eats algae sheets and frozen mysis shrimp. I have about 200# of live rock and he picks at it all day. Good fish for the novice.
Doug C San Diego , CA
Easily my favorite fish. Only time he shows aggression is when the azure damsel and black and white clown square off. He swoops in to break up the fight then goes back to his business of picking over the live rock. Does like to nip at my leather coral and had to move a favia to another tank. Leaves the LPS corals, chalice, mushrooms, and xenia alone.
Jared Fort Collins , CO
In my experience with this fish, I found it to be very aggressive. He was definitely not reef safe. It would swim around nipping at all corals but would usually leave soft corals alone. It's been my only marine fish to ever get Ich, which it got within a week of receiving him. (possibly stress related) After using a medication he recovered nicely. I tried to introduce a sail-fin tang and the angel attacked him to the point where I had to remove the angel and eventually traded him in at my local lfs. I would recommend this fish for a large fowlr tank, and be on the look out for Ich because they seem to be prone to it. Very beautiful fish with striking colors!
1-3 of 3 testimonials