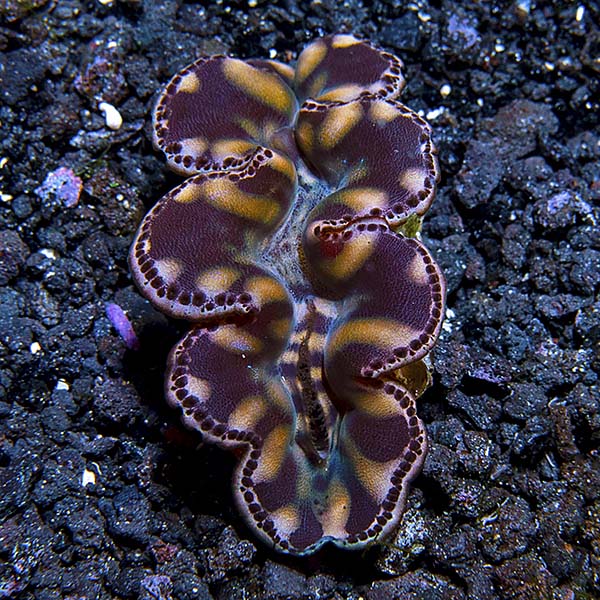 The Maxima Clam is also known as the Small Giant Clam and is one of the most widely recognized species of the giant clams. The beauty of its mantle with its rich variety of patterns and vivid colorations makes for a spectacular display in reef aquariums that are illuminated properly. Maxima Clams are known to live together in great congregations, and they can attain a maximum size of 12” in the wild.

The vast majority of Tridacna maxima available in the aquarium trade are cultured on land based clam farms in the Central and South Pacific. Maxima Clams are found in an endless variety of colors and patterns, and these clams are graded for size, their intensity of coloration, and how complex their patterns are, and then priced accordingly. Larger clams that have the most intense coloration and intricate patterns are much more expensive.

Maxima Clams can be identified by having a more elongated shell that lacks symmetry, with narrowly spaced scutes or scallops on the upper portions of each side of their hinged shells. Like some other members of its genus, T. maxima attach to hard substrate or rockwork with thread like appendages called byssal filaments, and can eventually burrow or bore into porous substrate over time. Maxima clams will arrive either unattached or attached to a small piece of rock or substrate. They will normally attach to a solid surface within a day or so of being introduced into the aquarium, so keep in mind that their first placement should be considered permanent. Never forcibly remove an attached clam from the substrate or rockwork, as lethal damage to their foot and other tissue will be inevitable. As a last resort, to remove a clam from a hard surface gently cut each byssal thread with a razor blade as close to the attachment point of the rock or solid surface, making sure not to slice or damage any tissue.

In the home aquarium, the Maxima Clams require intense lighting to thrive as they contain the symbiotic algae called zooxanthellae, and receive the majority of their nutrition from the light through photosynthesis. Smaller T. maxima that are 2" or less in size are much more sensitive to very intense lighting as their membrane is much thinner than larger specimens. For this reason care should be taken to properly photo-adapt them to the existing reef aquarium lighting in a similar manner to newly introduced stony and soft corals. When adapting a new Maxima Clam to very intense lighting, it is ideal to set them on a small rock or in a plastic dish with coarse substrate at the bottom of the aquarium. Over time the clam can then be slowly moved up higher in the aquarium.

Tridacna clams are also filter feeders and constantly filter the water for small particulates. Maxima Clams larger than 2" do not require supplemental feedings, but smaller T. maxima that are less than 2" should be fed a phytoplankton or greenwater supplement several times per week if maintained in a nutrient poor reef aquarium.

Tridacna maxima are relatively hardy clams, and require intense lighting and good water flow in the home aquarium. Proper water chemistry is very important, and they will thrive when calcium levels of 380- 450 mg/L, alkalinity level of 8-11 dKH, and magnesium level of 1280-1350 ppm are maintained.

Looking for the best food to feed your Tridacna Clams?