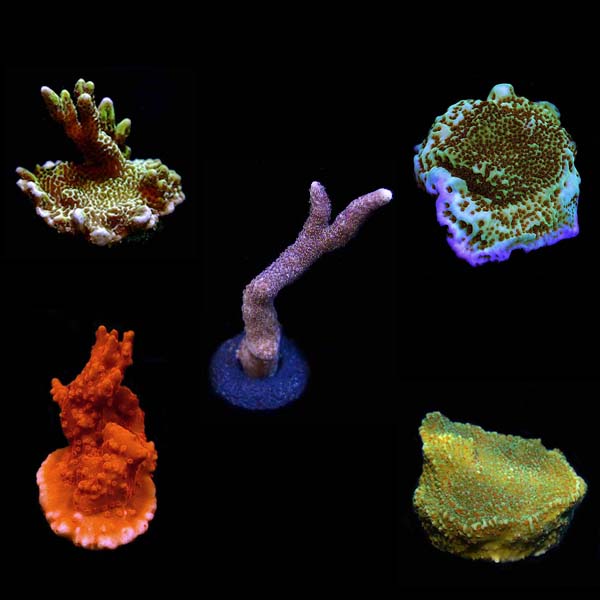 The Montipora corals included in the Assorted ORA® Aquacultured Montipora Frag 5 Pack are peaceful and can be placed in close proximity to other similar peaceful corals in the reef aquarium. These Montipora corals will thrive under moderate to high lighting conditions achieved by T-5s, powerful LEDs or the more intense metal halides. To maximize their growth rate, it is imperative to maintain high pH, alkalinity, and calcium levels. It is also important to keep phosphate and nitrate levels as close to zero as possible. If conditions are ideal, these corals can be cultured and grown into a new colony by the dedicated or experienced reef hobbyist. Under optimum conditions, the growth rate of these aquacultured corals are more rapid than most other corals found in an established reef aquarium.

Along with proper lighting and high water quality, coral frags included in the Assorted ORA® Aquacultured Montipora Frag 5 Pack will thrive when provided medium, intermittent water flow within the aquarium. This can be easily achieved with the addition of powerheads, wavemakers, or water circulation pumps. These Montipora corals satisfy the majority of their nutritional requirements by means of photosynthetic, symbiotic zooxanthellae algae hosted within their body. However, they will benefit from the addition of microplankton or foods designed for corals and filter-feeding invertebrates. For continued good health, the ORA® Aquacultured Montipora corals require the addition of calcium, magnesium, strontium, and other trace elements to the water.

ORA® Montipora Corals are attached to an aragonite block and can be easily placed in holes or between the rockwork of the reef aquarium.