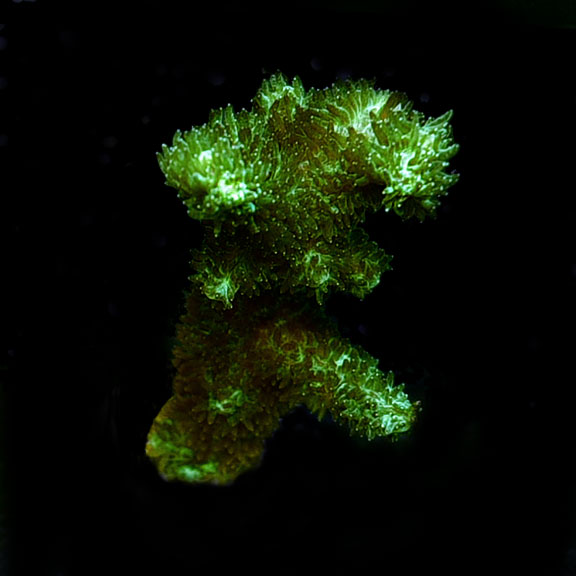 Create stunning "pops" of florescent green in your reef setup with ORA's aquacultured Hydnophora Coral. The Hydnophora Coral is a SPS coral often referred to as Knob, Velvet Horn, or Branch Coral. It is often confused with Acropora Coral because of its similar appearance, but they are only distantly related. Its genus name, Hydnophora, comes from the Latin hydnon (tuber) and phero (to carry), which describes its tuberous skeletal base. While members of its genus come in many shapes and colors, it is a branching variety of a cream or bright, fluorescent green color, and very short blunt polyps.

Its behavior is often labeled very aggressive; it will kill most other corals that come in close proximity with it. It is important to provide plenty of room between itself and other corals. The Green Hydnophora Coral is a difficult coral to maintain, but if given the proper conditions, it will do well in the reef aquarium. It will require a high light level combined with a strong water movement. For continued good health, it will also require the addition of calcium, strontium, and other trace elements to the water.

It will feed on micro-plankton or food designed for filter feeding invertebrates, if it is offered.

The Green Hydnophora Coral is mounted on a small black plastic plug that can be placed easily and securely in or between the rockwork in the reef aquarium.